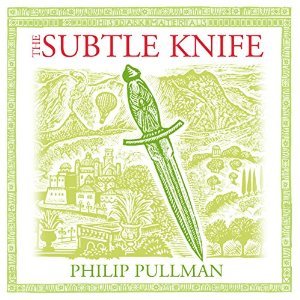 Lyra and Will, her newfound friend, tumble separately into the strange tropical otherworld of Cittagazze, “the city of magpies,” where adults are curiously absent and children run wild. Here their lives become inextricably entwined when Lyra’s alethiometer gives her a simple command: find Will’s father. Their search is plagued with obstacles–some familiar and some horribly new and unfathomable–but it eventually brings them closer to Will’s father and to the Subtle Knife, a deadly, magical, ancient tool that cuts windows between worlds. Through it all, Will and Lyra find themselves hurtling toward the centre of a fierce battle against a force so awesome that leagues of mortals, witches, beasts, and spirits from every world are uniting in fear and anger against it. This breath taking sequel will leave readers eager for the third and final volume of “His Dark Materials.”

I was always going to enjoy this book more than the first because I listened to it in a matter of days rather than years! (Book 1 Review).

Even taking that into account, I much prefer this story. I welcomed the addition of Will. Voice actor wise he was also much easier to listen to than Roger whose accent I found incredibly grating. Lyra’s atrocious grammar continued to wind me up (surely being schooled in Oxford would have seen to that?) but her character growth made it more tolerable.

I found Will an interesting and relatable character. I too like to blend in as a way to survive situations I don’t want to be in. I also liked his relationship with Lyra, and the way he influenced her character development. They are an interesting pair to follow and I am keen to see how things turn out for them in the next book.

I’ve actually already started listening to The Amber Spyglass which you can read about here.

I think this may be the shortest audiobook I have listened to (it is the shortest of all books in the trilogy) and I found that a real help in getting through the story. I don’t like to listen in too many pieces as it impacts my ability to follow the story.

This book left me excited to see what was coming next. It gets an extra star compared to ‘Northern Lights’.